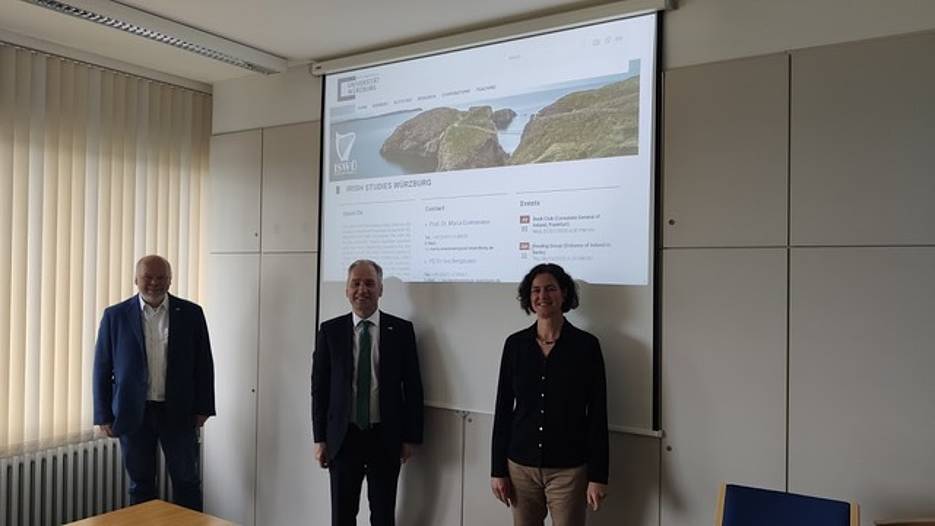 Ever since the Irish monks Kilian, Kolonat and Totnan proselytised Franconia around 686 AD, Würzburg has been considered ‘the Irish city on the continent.’ Today, manifold activities keep the close connection between the city and the Emerald Isle alive. The newly founded Irish Studies Würzburg (ISWÜ) at the University of Würzburg (JMU) is engaged in the study of the literature, language, history and culture of the Republic of Ireland, Northern Ireland, and the Irish diaspora. ISWÜ, initiated by PD Dr. Ina Bergmann, Associate Professor of American Studies, and Prof. Dr. Maria Eisenmann, EFL Methodology Chair, is a cooperation under the umbrella of the European Federation of Associations and Centres of Irish Studies (EFACIS), which unites the major national professional associations in the field of Irish Studies as well as about 50 academic centres in over 25 European countries. As part of the launch of ISWÜ, Irish Ambassador Dr. Nicholas O’Brien visited on June 17, 2020. In conversation with Prof. Eisenmann and Deutsch-Irische Gesellschaft e.V. (DIG) chairman Matthias Fleckenstein, Ambassador O’Brien welcomed a cooperation between ISWÜ and the Embassy of Ireland. He announced that he would be delighted to attend the ISWÜ kick-off meeting, which is planned to take place in spring of 2021. Ambassador O'Brien and chairman Fleckenstein offered valuable input in terms of ideas for the event. 2021 will be John Millington Synge’s 150th birthday and since he, as a former student of JMU, had a strong connection to the city, a tribute to the Irish artist might be incorporated. Over coffee and cake, several other thoughts concerning Ireland, the newly founded ISWÜ, and future cooperations were exchanged. At the end of a lively talk Ambassador O’Brien expressed his gratitude for the hospitality, the effort put into the formation of ISWÜ, and the drive to promote Irish Studies, not only for all scholars, PhD students, and students of English at JMU, but also for non-academic circles and all those interested in Irish issues in Würzburg and the surrounding area.