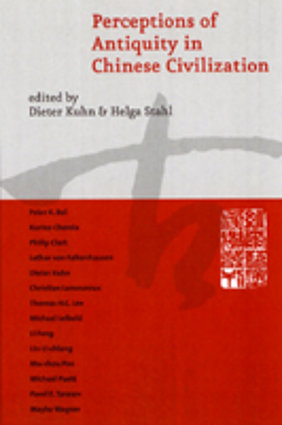 The wide-ranging, learned, and insightful studies collected in the volume meticulously edited by Dieter Kuhn and Helga Stahl make the most eloquent case to date on the relevance and centrality of the idea of antiquity in the history of China.  A vibrant, powerful, and fiercely debated concept, antiquity is shown to be closely connected with notions of authority, transmission, knowledge, and culture in Chinese philosophy, science, historiography, and politics. Probing critical themes ranging from ritual to myth and from court culture to material culture, the authors articulate clearly and persuasively the importance of antiquity in ancient as well as in modern times, thus spanning three thousand years of intellectual history.  In short, the essays included in this volume constitute a true milestone in our understanding of Chinese civilization, and a significant addition to our knowledge of the human past.

With a continuous tradition of recording and reflecting on the past according to long-established conventions in a single language, China has always been both haunted and inspired by its history. In this volume, leading specialists in Chinese intellectual history explore the ways in which Chinese thinkers have perceived the distant past, “antiquity,” and discover a wide range of reactions with roots deep in the Chinese historiographical tradition. Condemned as superfluous, old fashioned and a hindrance to societal change, the past was equally praised as a yardstick for virtue, a repository of wisdom, and a mirror for guiding the present. At once erudite and accessible, this learned and stimulating volume reflects a recent outpouring of scholarship on Chinese historiography and makes a significant contribution to our understanding of the place of the past in the Chinese tradition.