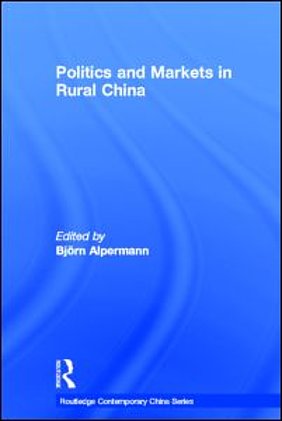 Thirty years have passed since the beginning of the reform era in China which saw important changes in agriculture and rural organizations. But it is clear that certain entrenched legacies from pre-reform China still linger on even after WTO accession, most importantly the key role played by state actors and politics in the development of markets in rural China. Although increasingly diversified markets have emerged for major agricultural inputs and products, their development cannot be understood without taking this role into account.

Against this backdrop, the contributors to this book offer a fresh account of rural politics and markets, consciously linking these two realms and highlighting their interconnectedness. The book is organized in three parts addressing respectively markets for agricultural inputs and outputs as well as current policies in rural development. The perspectives adopted link macro- and micro-level analysis in each chapter and thus contribute substantially to our understanding of existing markets.

As an original account of rural politics and markets in China this book will appeal to students and scholars of Chinese politics, economics, development studies and political economy.

5. Grain market and policy in China, Li Xiande, Wang Shihai and Jia Yan
6. The reorganization of the sugar industry in China in the context of globalization: insights from Guangxi province, Louis Augustin-Jean
7. China’s cotton sector: the politics of a managed market, Björn Alpermann
8. The role of the state in modernizing China’s fine wool marketing sector, Scott Waldron, Colin Brown and John Longworth

9. Paving the road to a socialist new countryside: China’s rural tax and fee reform, Christian Göbel
10. Building a new socialist countryside: model villages in Hubei, Stig Thøgersen
11. The nature of cooperatives in China: the implementation and paradoxes of the law on cooperatives in Shanxi province, Louis Augustin-Jean and Xue Ruining
12. Surveys and learning about village elections and rural China: an analysis of a 2005 national village election survey, John James Kennedy and Yaojiang Shi
13. The end of urban–rural differentiation in China? Hukou and resettlement in Chengdu’s urban--rural integration, Jesper W. Zeuthen and Michael B. Griffiths